I have been a little MIA from the blog. My family came out for a week long visit, we had a couple different military balls to attend, and overall it’s been a busy time. The good news is that I have been cooking, and I have like three new recipes waiting to be shared. It was just a matter of having the time and energy to write them out. But I’m back in the swing of things!

So there’s no escaping the reaction the title of this recipe will get. Indian food mixed with Italian food? Uh… what?! The whole time I was making this dish, I kept asking myself if it was crazy. And it was crazy… crazy delicious. 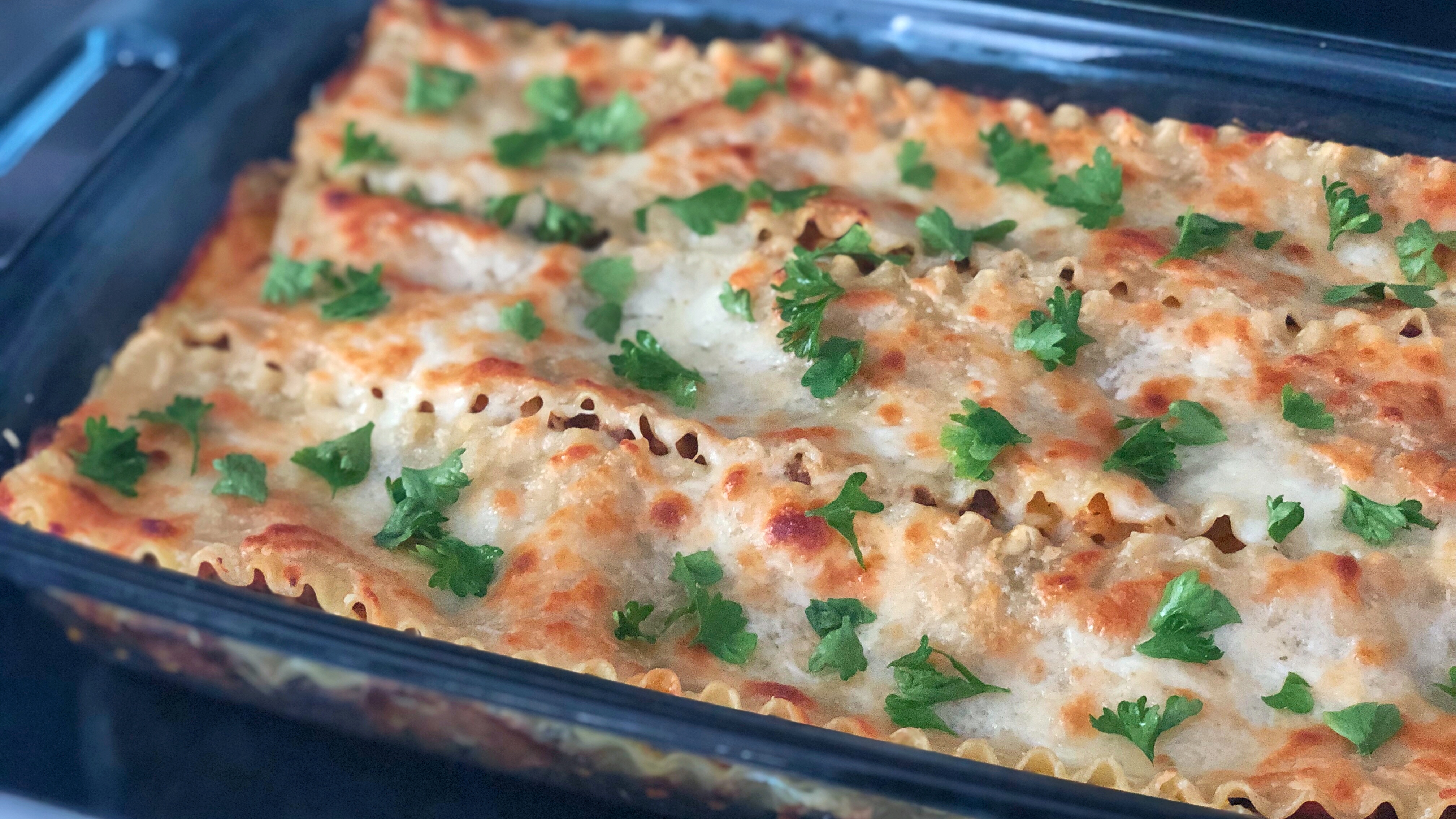 I love Indian food. Tikka masala and vindaloo and pakora and curry and the rice and the naan… YUM. Unfortunately I have not found a good place here in Hawaii yet (hit me up if you have any leads) so when I am craving those bold, spicy Indian flavors, I have to make it myself.

The base of this recipe comes from having a lot of leftovers from my slow cooker coconut curry chicken. So yeah, the lasagna kind of requires making a recipe before the recipe, but you can always use the chicken (or beef, or lamb, or whatever) tikka masala from your weekend take-out leftovers. Another shortcut option would be to get a really good jarred curry or tikka masala sauce and throw it in the crock-pot with some chicken for a few hours. 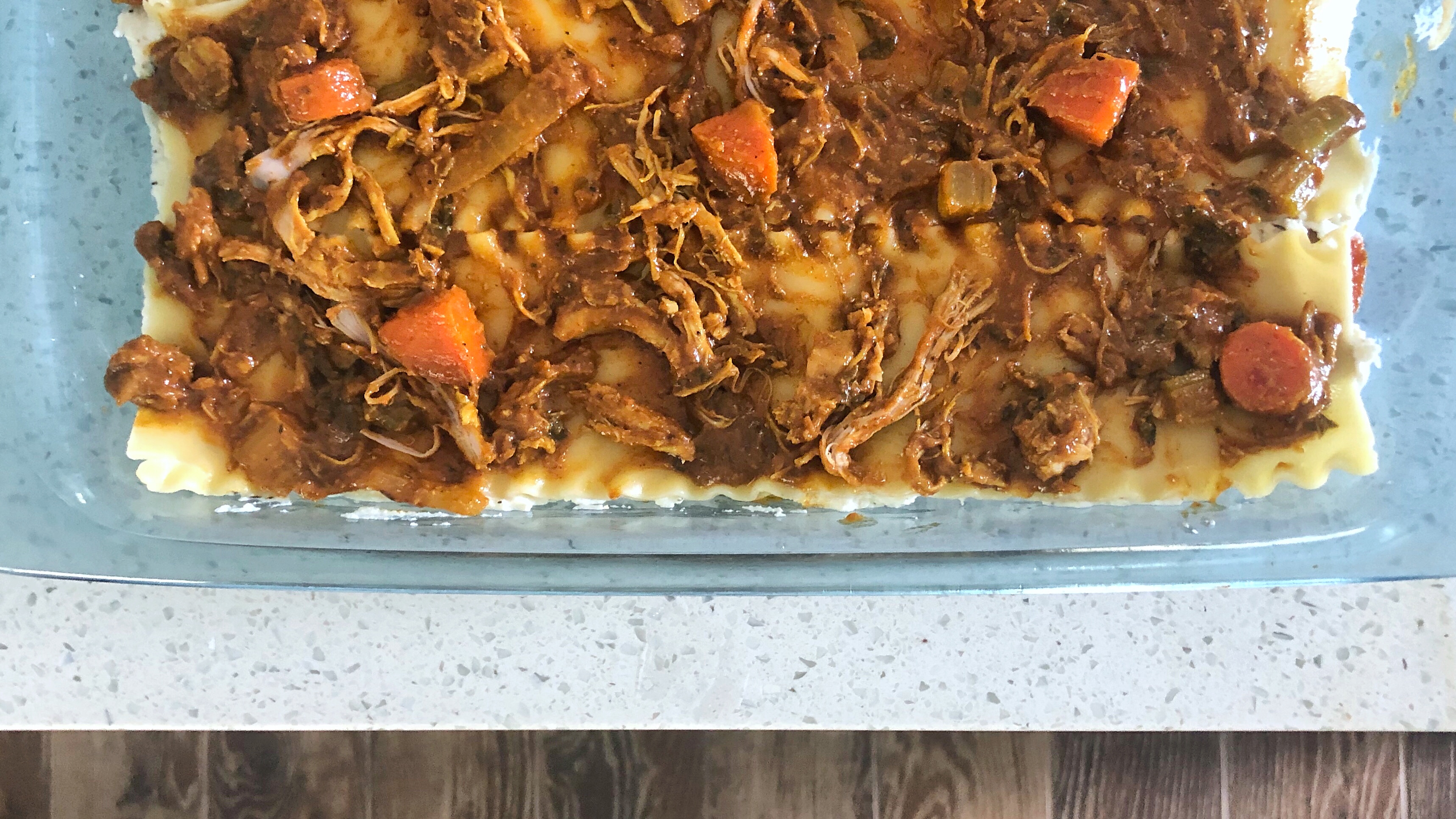 **The only thing you have to keep consistent is that before going in the lasagna, the chicken (or whatever protein you choose) needs to be shredded and easy to spread** 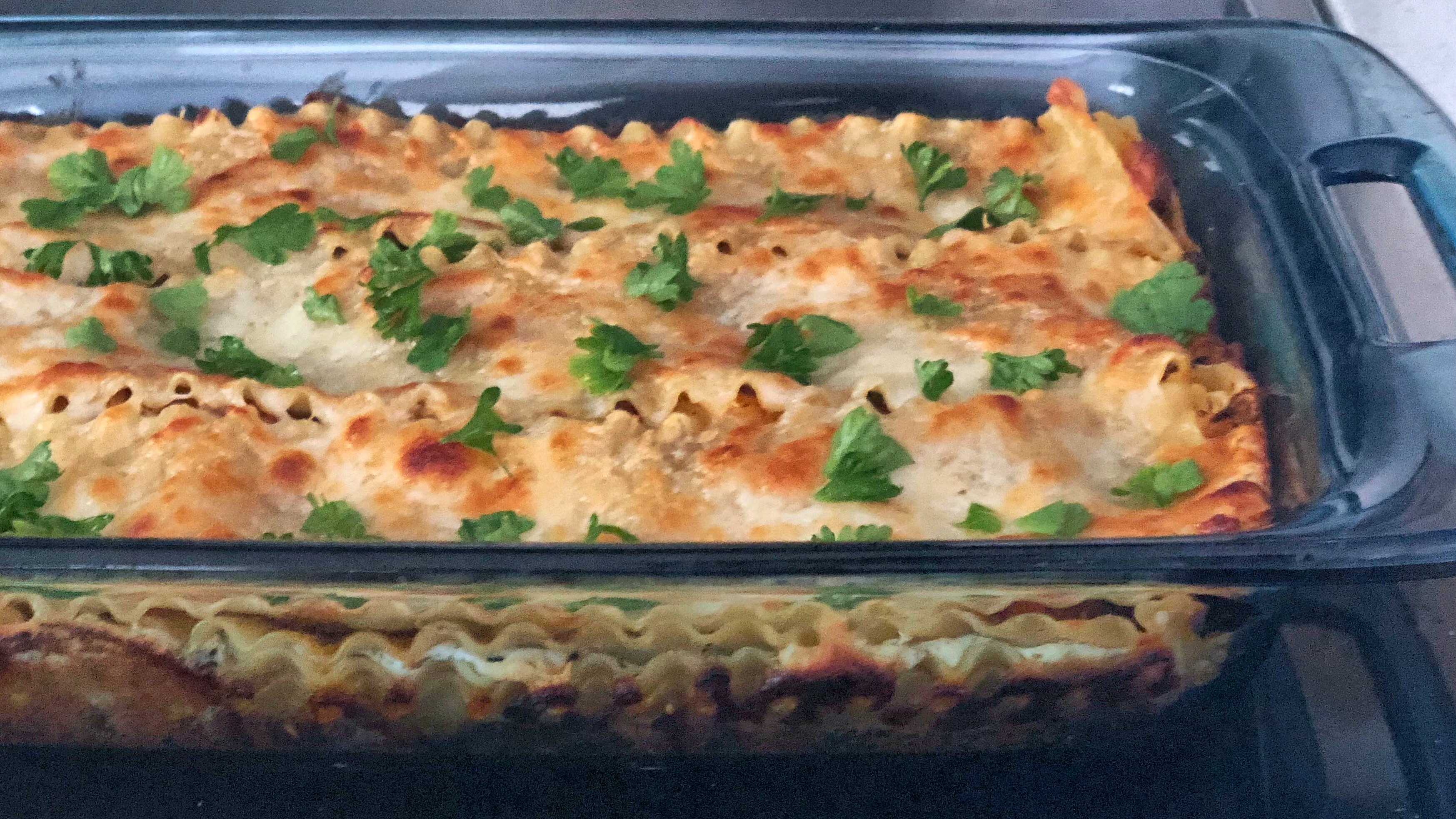 It looks like lasagna, it tastes like Indian cuisine. Maybe it’s wrong to call it lasagna? Maybe it’s more of a casserole? I’m not sure. This is a rare recipe that I threw together on a wild whim and ended up surprising myself. (Thank goodness I had the instinct to write down measurements as I went.)

Unlike most recipes I come up with, this isn’t one I urge people to get up and try right away. It’s more in the vein of an interesting use for your leftovers. Here’s the scenario I found myself in: It’s two days later, the curry chicken is sitting in the fridge and you just aren’t feeling it anymore. Oh hey, you have those lasagna noodles that have been hanging out in the pantry, why not? Boom, a whole new dish.

Again, the key here is some shredded, saucy chicken. If you need to stretch it a little more to hit 2 full cups, add a little tomato sauce. Really, that’s the only difference between this and normal lasagna… the meaty sauce. In theory, this could work with chicken in enchilada sauce, or sesame sauce, or buffalo sauce. 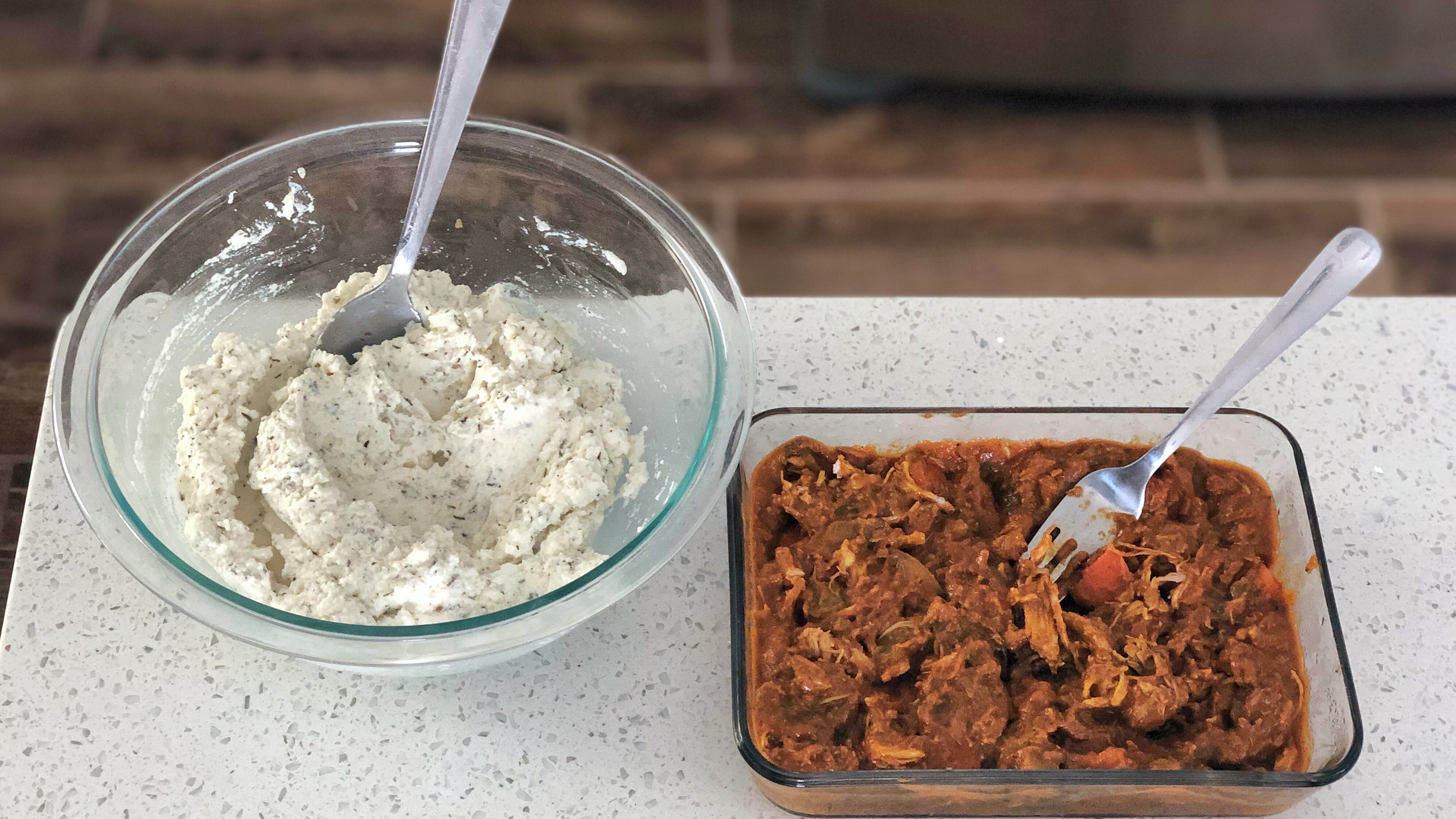 The possibilities are endless, and it really gives new life to the leftovers and (added bonus) 1-2 servings of chicken becomes a meal for 4-6 people.

Part of me thinks maybe this recipe was a little too unrefined and improvised to share here, but when I tasted it, I couldn’t help myself. It was so fun and delicious and different that I had to put it out here. I don’t expect it to be my most popular dish, since it kind of requires the extra step in the beginning and I prefer making things easy-peasy-lemon-squeezy for you all… but hey. No harm in letting you decide for yourself if you are ready for Indian chicken lasagna. 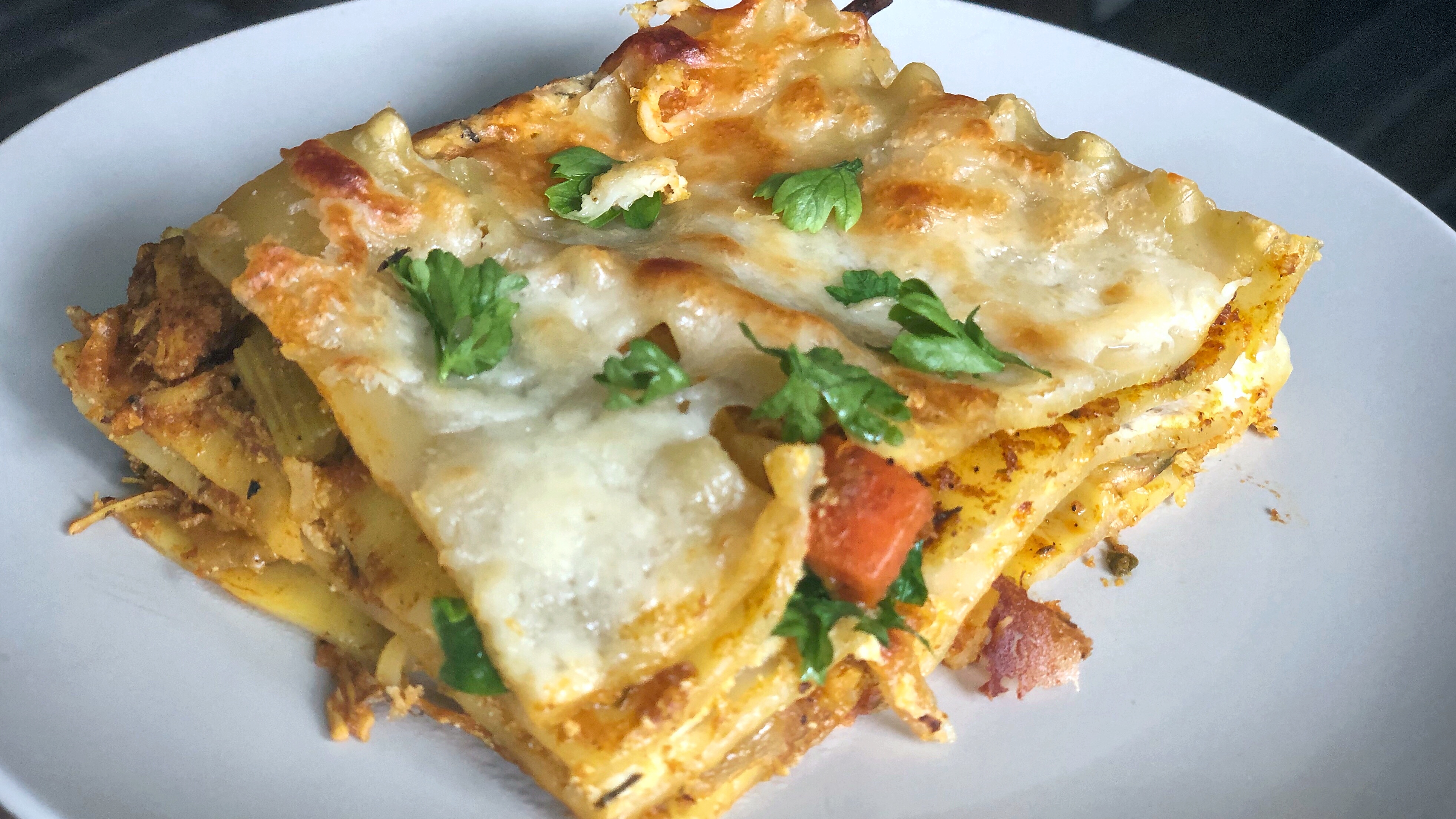 I’m rounding out this block of recipe redux posts with a look back on a couple of posts from last January when I began exploring healthier ideas to pasta dishes. I love pasta. A lot. I could eat it all the time, but sometimes it’s nice to take a lighter approach.

You can check out my past posts: healthy alternatives to pasta and a recipe for shrimp and zucchini noodles.”

It’s funny, I’m seeing a trend among some of my friends that since the spouses all deployed a few weeks ago, everyone is starting up diets. It makes sense though. It’s easier to eat better when you are just cooking for yourself. Also, I feel like the last month or so my husband was around we were making the most of our time together, which included dining out and a few overindulgent nights of drinking and fun. Even outside my little circle, diets seem to be big right now with the holiday season coming up fast. Everyone is trying to drop a couple pounds before its time for turkey, pie and all that good stuff.

This week I played around with spaghetti squash and zucchini noodles. Let’s talk about the differences. Both are great alternatives to pasta, and low in calories. A cup of the squash is around 40 calories and a medium zucchini has around 30. I wouldn’t recommend saving and storing any cooked squash for the next day, but zucchini noodles can be made ahead of time and stored for a couple days in the fridge. As for taste and texture, both really take on the flavor of what ever other ingredients or sauces you use to dress them up. Squash has more of an aroma to it though. I look at them essentially as angel hair (squash) versus fettuccine (zucchini). You can’t go wrong with either.

Spaghetti squash doesn’t take much more than a knife and a fork to prepare. Poke a couple small holes into the squash and microwave it for about 4 minutes to make it easier to cut in half. It made it much easier. Then I removed the seeds and roasted the squash with a drizzle of olive oil, salt, pepper and italian seasoning for 45 minutes at 400 degrees. Zucchini on the other hand will require some kind of spiralizer, unless you want to cut it into small strips by hand.

I use zucchini noodles a lot. Spaghetti squash not so much. I have a couple friends who swear by it though, so for my first go with it, I used my old recipe.

I just replaced the zucchini noodles and added a little baby spinach into the mix. It was really good, but texturally I think I am more of a zucchini noodle kind of girl. But I look forward to trying so more recipes, maybe something with a heartier sauce or that uses the oven.

A couple days later I decided to flip the script. I made zucchini noodles and swapped shrimp for some sea scallops. I like to cook my scallops, seasoned with salt and pepper, in a small skillet. I melt a little butter with some garlic and fresh herbs like sage, basil or rosemary (whatever I have on hand) to sauté them in, just a couple minutes on each side until they turn a light golden brown.

For the zucchini noodles, I sautéed them in a separate skillet with a little olive oil, minced garlic, salt and pepper. After a couple minutes, when they start to become tender, I toss the noodles with a basil pesto sauce. If you can manage both skillets at the same time, this dish only takes about 5 minutes to put together, and it looks and tastes like something from a restaurant.

I apologize for the lack of an exact recipe to follow here, but that’s kind of the point. Both of these veggie noodles are easily added to your favorite pasta recipe. Keep it simple and use them with marinara sauce and meatballs, or alfredo sauce and grilled chicken. They are extremely adaptable, so don’t over think it. Also, since they are so much healthier than regular pasta, you won’t feel guilty about a little extra parmesan cheese on top.

I hope you liked looking back at some of my past posts with me. I plan on doing some more of these sporadically in the future, but next up will definitely be a brand new recipe for you all… I just have to to get back into my kitchen and figure out what it’s going to be!