It’s been a while. Before I start, I want to point out that there’s the slightly new & more streamlined format for The Picky Gourmet posts. It’s gonna go like: short introduction to quell the general online jokes about bloggers talking too much when people just want the food (ha), the coveted recipe itself, followed by any suggestions or possible substitutions, & finally all the process photos are at the end for the visual learners.

OK, the elephant in the room here is that my big return to blog recipes happens to be right when grocery stores are the last place most people want to be. I hope everyone out there is staying safe, washing hands & keeping calm during this time while we are all trying to deal with this virus.

The good news is, this recipe happens to use a lot of ingredients you might already have on hand. Well, as long as you didn’t blow your whole grocery budget on toilet paper. Surprisingly, for a dish that is full of fresh, herbaceous flavor, the only things you actually need from produce are an onion & garlic (which I feel like most people have laying around anyway). Everything else is a pantry pull!

So let’s fire up the oven, hunker down with a glass of wine & make a… 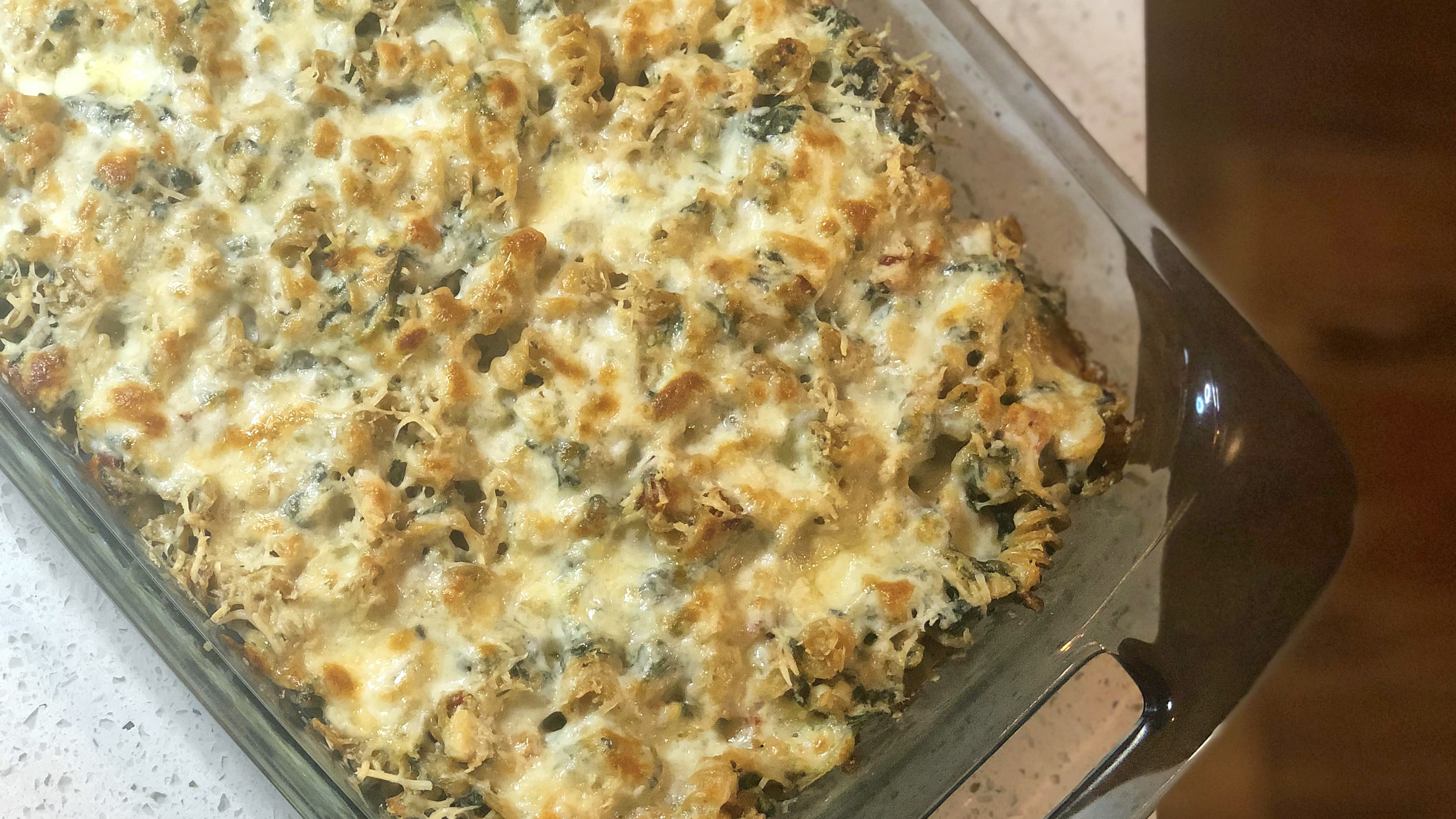 Suggestions & Substitutions: obviously any pasta can be used here, as long as it isn’t a long noodle like spaghetti. Ziti, penne, cavatappi, anything like that would be great. I like using the whole grain here, because there’s so much flavor & cheese, why not sneak in a little extra fiber in there? Since this is a vegetarian recipe, protein infused pasta would be another great choice.

The key with these specific pantry ingredients is taking away the excess moisture. Obviously, frozen spinach needs to be thawed & have all that water squeezed out of it. I used the sun-dried tomatoes that come in a packet, but if you already have the jarred/oil-packed kind, just dab them with a paper towel. The tomatoes & artichoke hearts (which I always buy in a jar) don’t have to be bone dry, but just enough to avoid too much oil in the mixture.

While this makes a great meatless Monday or vegetarian dinner, if you want some added protein, throw some cubed rotisserie chicken in there or even some crumbled sausage. And if you want to cut back on the cheese, you could skip the top layer of mozzarella. (I mean, I wouldn’t, but no judgement.)

And a final note on the cheese. I personally love the funky, strong flavor that pecorino adds to the dish. If you don’t have pecorino cheese or don’t feel like spending the extra money, you can use all parmesan. I just beg you to grate it yourself instead of using the green tube can. 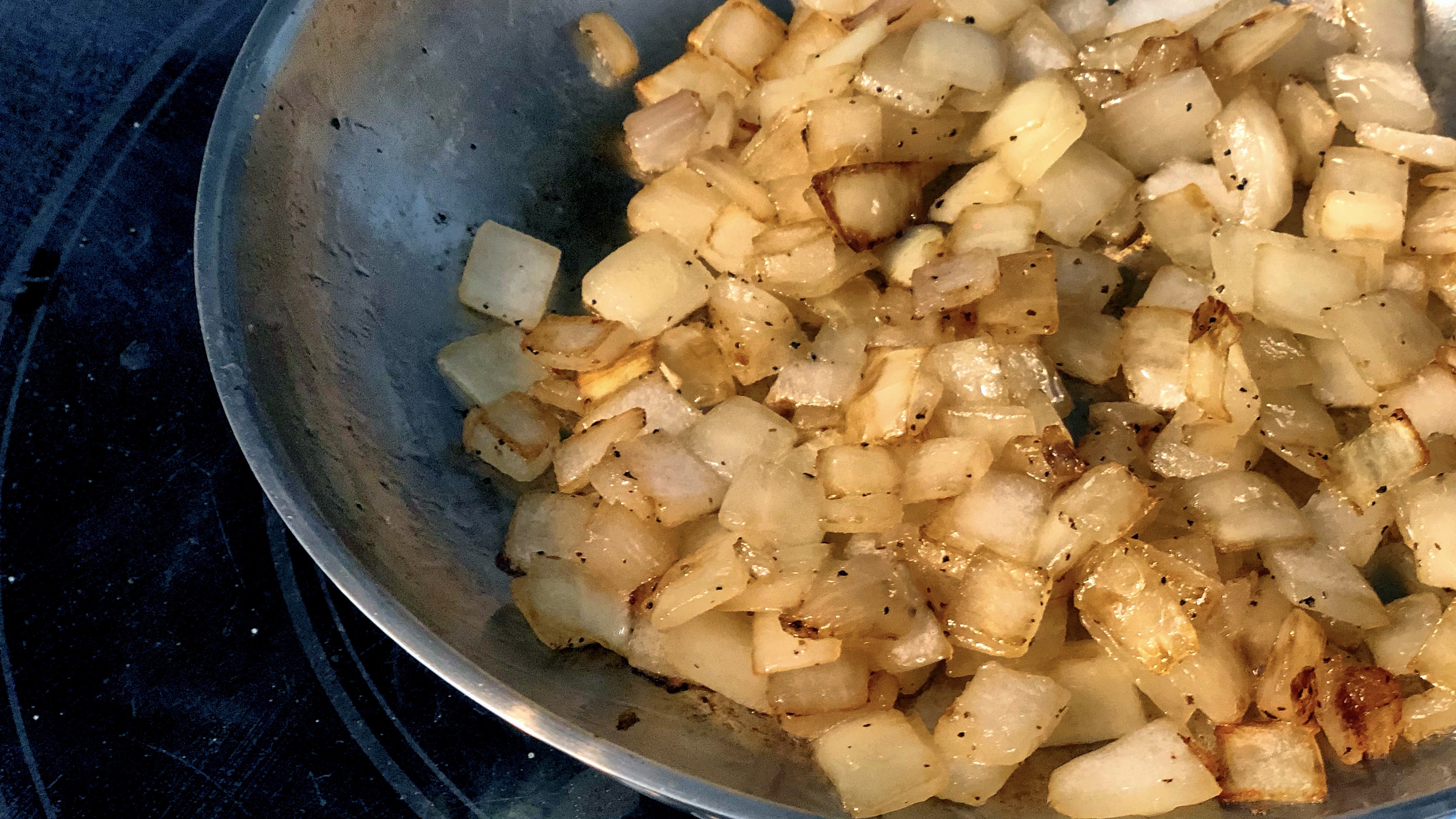 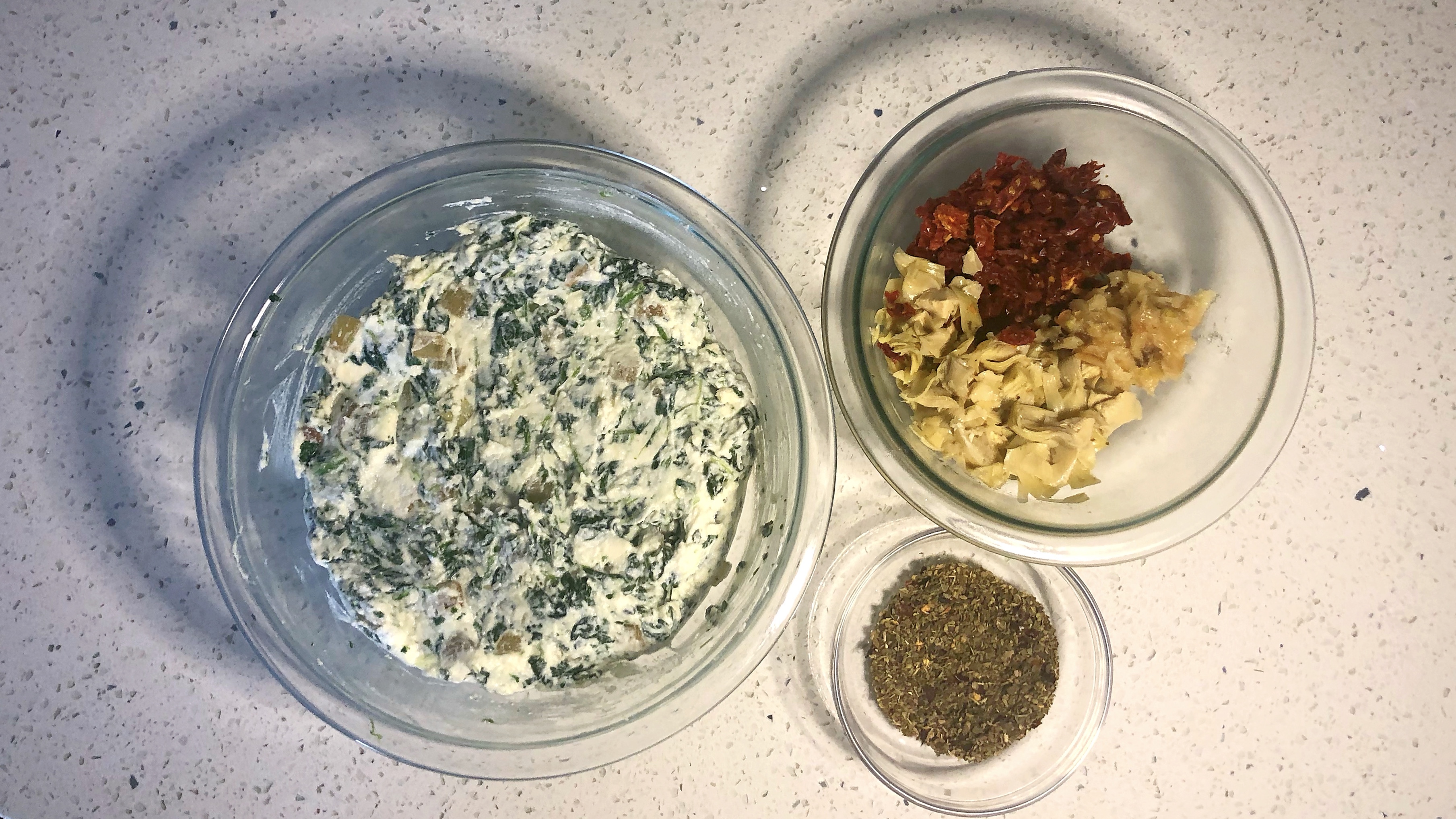 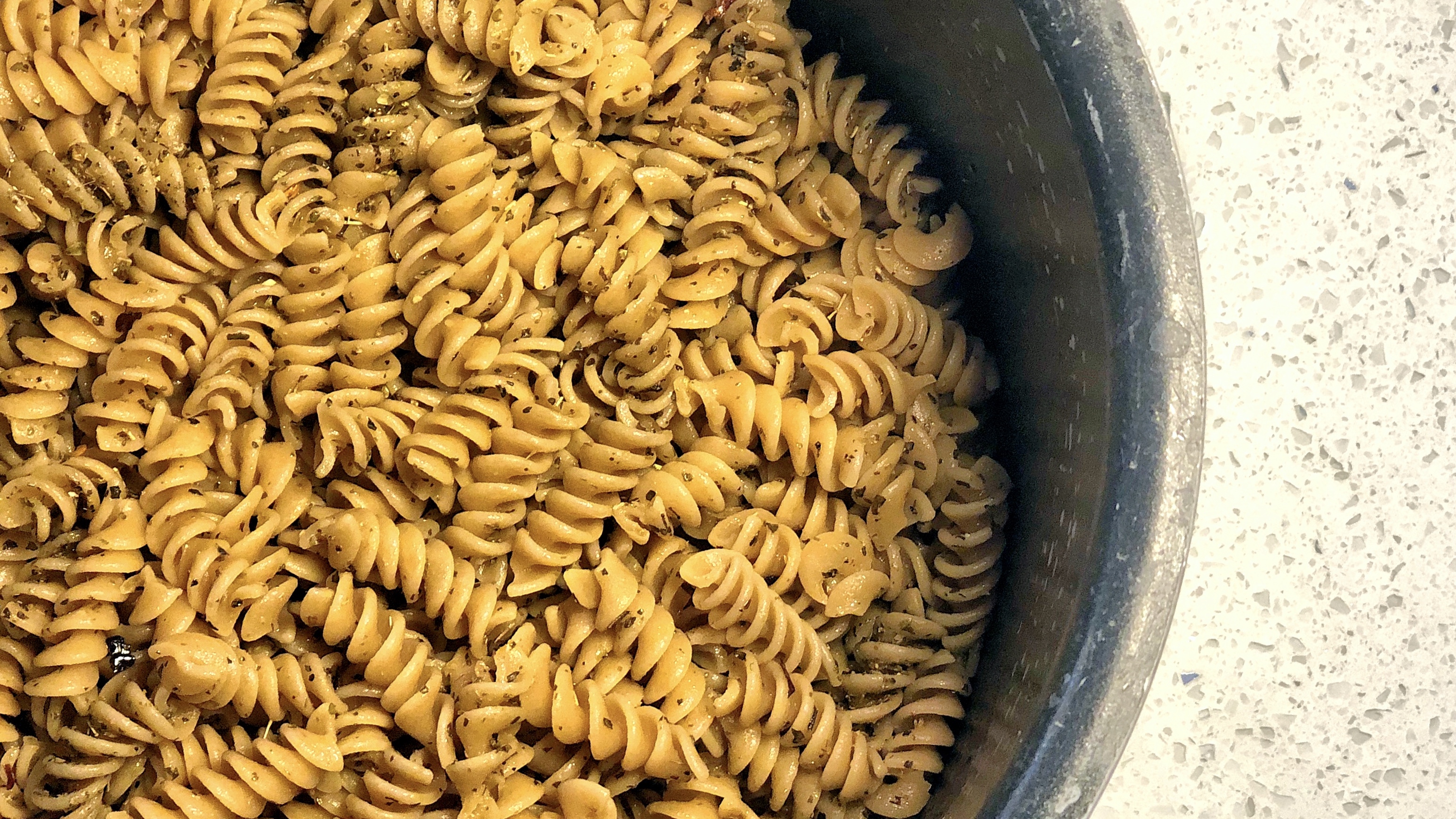 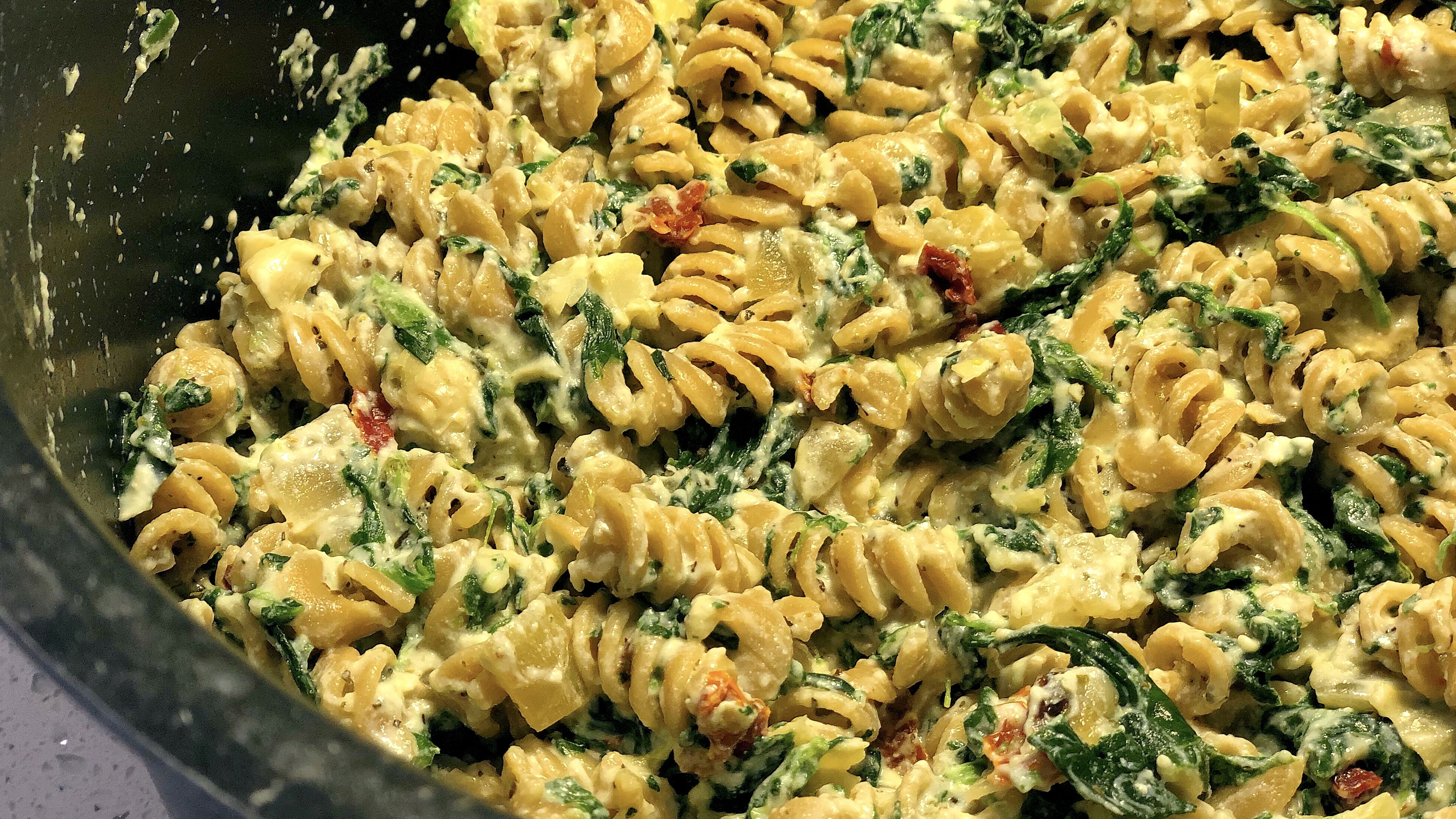 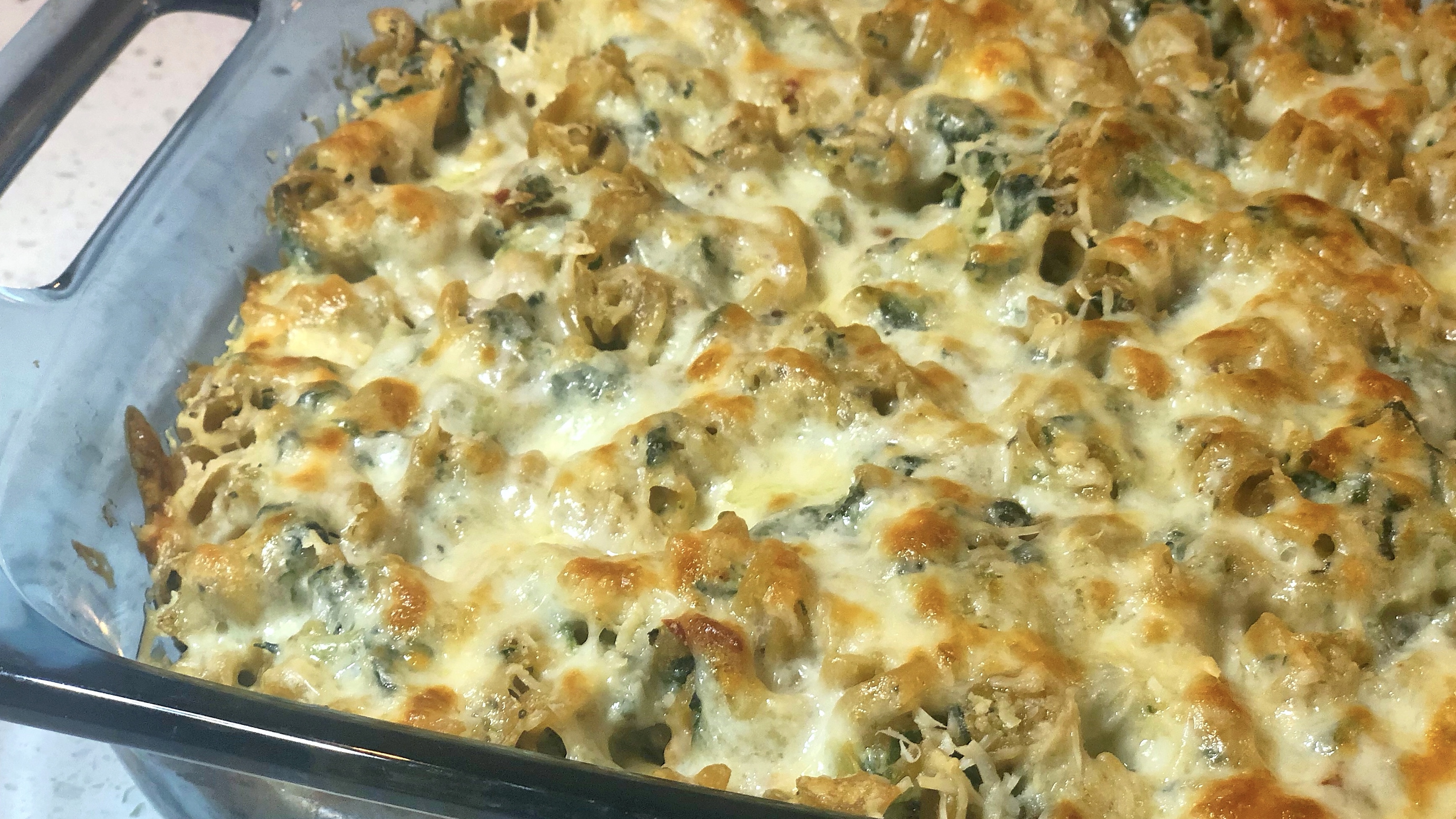 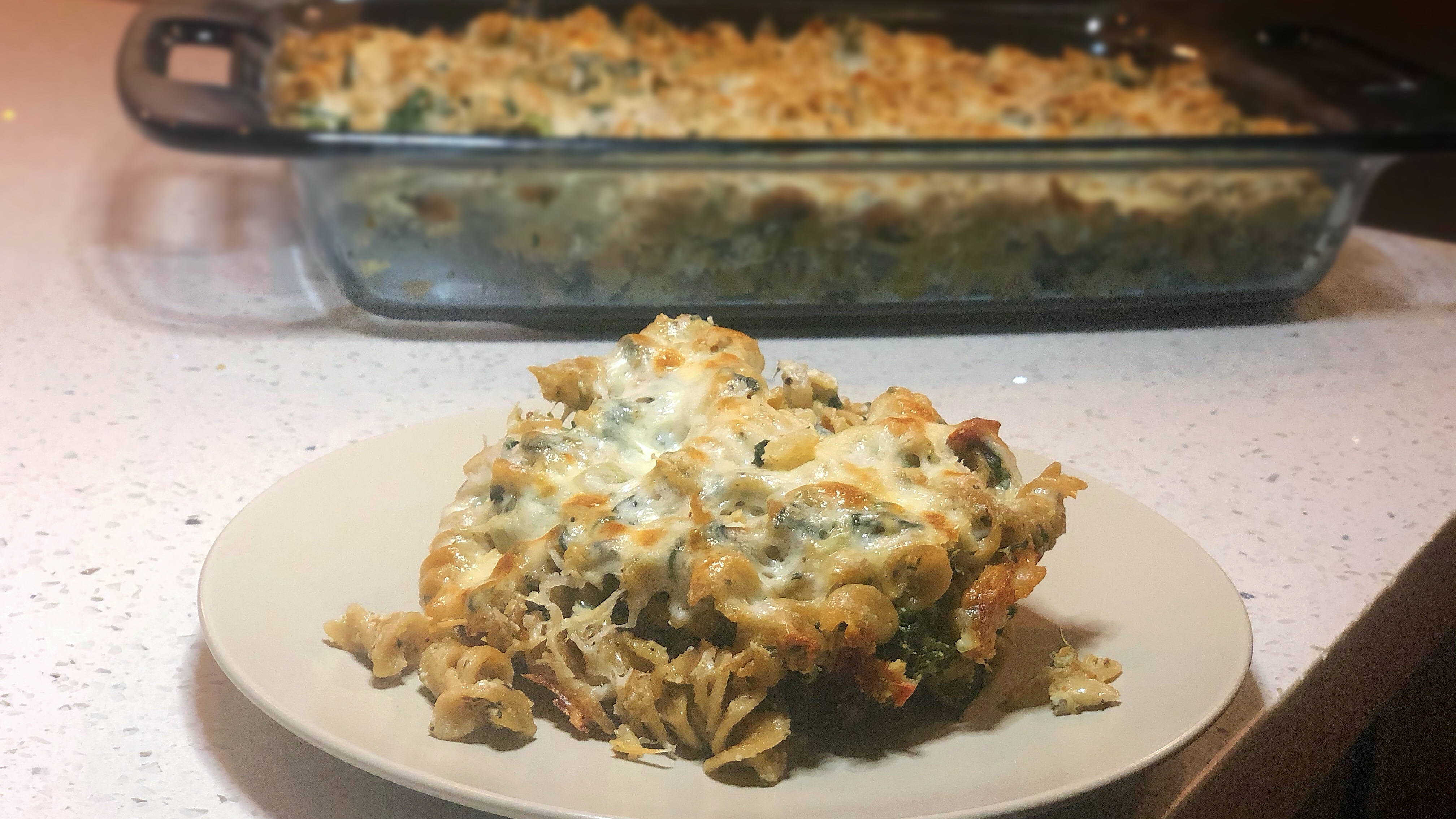 I really had a hard time naming this one. I toyed with calling it shortcut lasagna, or baked ravioli, but I settled on dubbing it a casserole. Whatever it is, it’s a fun and easy dinner great for a weeknight or to feed a family, that sneaks in some veggies amongst all that delicious sauce and cheese.

This recipe is also versatile. If you have read my other posts, I love giving people options and shortcuts, because everyone is different. Different schedules, different pantries, different tastes. Since I used to be an unbelievably picky eater, I think it’s important to let people have some room to play around.

Here’s a visual on how to arrange the layers

By adding a whole chopped onion to my sauce, it gives it more of a thick texture and a noticeable crunch. You could alway substitute with finely chopped bell peppers or mushrooms to get that extra vegetable element. If you don’t have time for prep, cheat and get a super chunky jarred pasta sauce.

I love zucchini and think it’s really what makes this dish special, but it would completely work without it. To slice it you either need a mandolin or a really sharp knife and patience. I don’t have a mandolin, so start by cutting the two ends off, cutting the zucchini in half, and then very carefully slicing it into thin strips. By halving the zucchini it makes it easier to slice by hand and also easier to get through when you are scooping out portions of the finished dish. Worst case, you could slice it into coins like you would a cucumber, it will just take longer to layer and you won’t get total coverage like you would with retangular pieces.

This is not what I would call a totally healthy dish, but if you have kids, it’s an easy way to sneak in some fresh vegetables. You can also easily feed 6 to 8 people with this dish by serving it up with a simple salad and maybe some garlic bread. Since its just my husband and I, we portion it out and save what we don’t eat for leftovers. It holds up very well in the fridge.

Overall this requires a little more time and a little more mess than the standard ravioli bake, but it’s those extra elements that really make this more than just a big block of sauce and cheese. Adding in just a couple vegetables and fresh basil takes it to the next level of texture and taste. It’s also fun to dig in and see that bright green layer of zucchini right in the middle. Try it out! I promise it’s easy and everyone will end up with a clean plate.