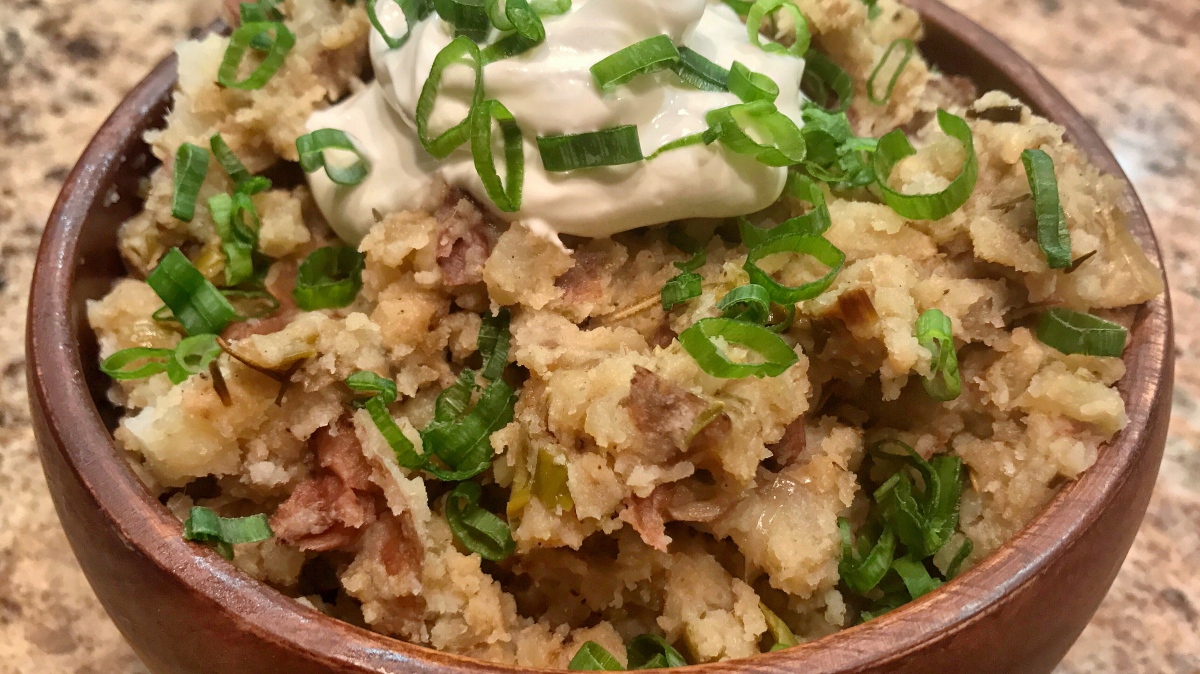 My second side dish idea this week is a slow cooker recipe. I LOVE the slow cooker. You dump it all in, forget about it and come back to something delicious. You can set it up before work on a weekday or get dinner prep out the way on a weekend so you can relax.

The theme of these sides is easy-peasy. By making “smashed” potatoes instead of mashed, you don’t have to bother with a mixer or a lot of manual labor. The slow cooker makes the potatoes so incredibly soft, they practically fall apart.

In a few hours, magic’s going to happen

Plus, mashed potatoes aren’t that hard to screw up! If they aren’t super smooth and fluffy, they are kind of a bummer. This technique is more rustic (that word cooks use for not-so-pretty) and a lot easier to get just right. It’s also a crowd-pleaser. The only side dish that my friends & family have requested of me more is the last one I’ll be sharing in a couple days! Garlic smashed potatoes are a very, very close second.

Note that this recipe makes four decent-sized portions, it’s not going to make an overwhelming amount. Double up if you want to feed a crowd or have a bunch of leftovers!

I do like mashed potatoes, very mush so, but for me, some dishes need a little more texture. For example, I love making this with fried chicken. It’s perfect alongside barbecue too, with some greens or slaw.

Of course, you could always whip these up with a mixer if your family prefers that. But maybe give it a shot. I’ve had people look at them like I was just being lazy, but when they eat them, they love that there’s actually something to chew on.

Speaking of texture, the green onions contribute to that as well. It’s just one more unexpected little crunch in there. I like chives too, but since I was using the onion bottoms cooked into the potatoes, why waste the tops? It ties it all together.

This is also become my Thanksgiving potato dish. I love that I can free up stove space by making them in the slow cooker. Using red potatoes and leaving the skin on saves prep time too. It’s also one less platter or bowl to clean up, because when I set up my “buffet”, I keep the potatoes in the crockpot on warm.

Alright everyone, I’ll be traveling soon, so make sure to follow my instagram for some more foodie adventures. I’ll be back with a sweet new recipe in a couple weeks. See you then!