Well, it’s been a little bit since I had a recipe for you guys to try. There’s a few behind-the-scenes things I’ve been working on for the blog that hopefully will be coming together soon. We’ve also been making great progress on our house. I plan on doing a post about the kitchen and garden once we get the last little finishing touches done.

Let’s get back to today’s recipe. I’m calling this a pizza. Some might want to call it a flatbread because it’s not round, but I’m sticking with pizza.

If you had told me to come get some pizza when I was a little kid, and you gave me this, I would have been totally bummed out. Mushrooms were always gross to me, like one of my big “no way” foods. I think a lot of picky eaters really dislike the idea of them. The way I got used to them was pizza. I’d try a little bit at a time, sometimes giving up and picking them off, but eventually, I grew to love them.

This recipe is inspired by a pizza in a restaurant in California that taught me that mushrooms are just like any other food… delicious when covered in cheese and garlic. 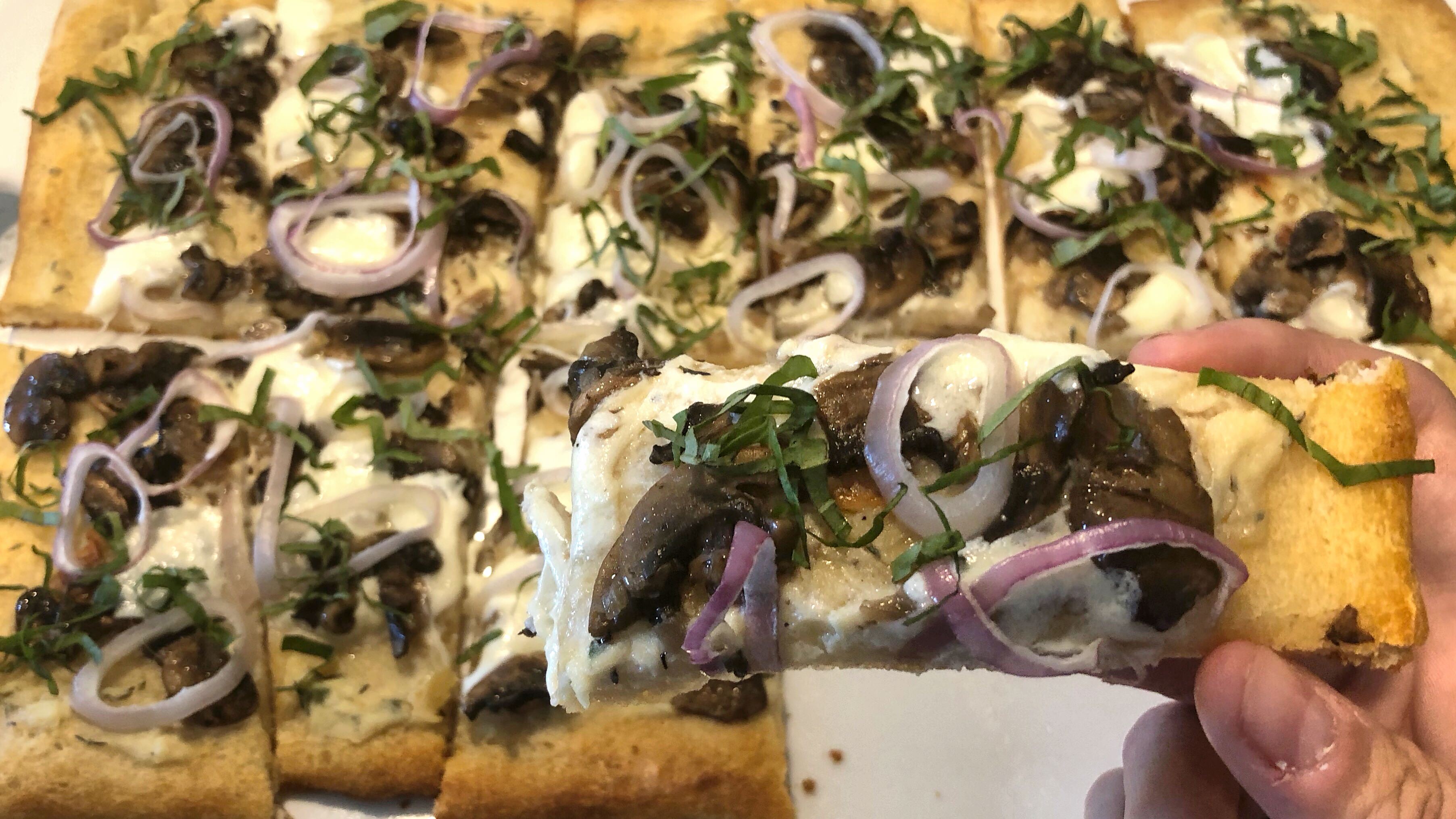 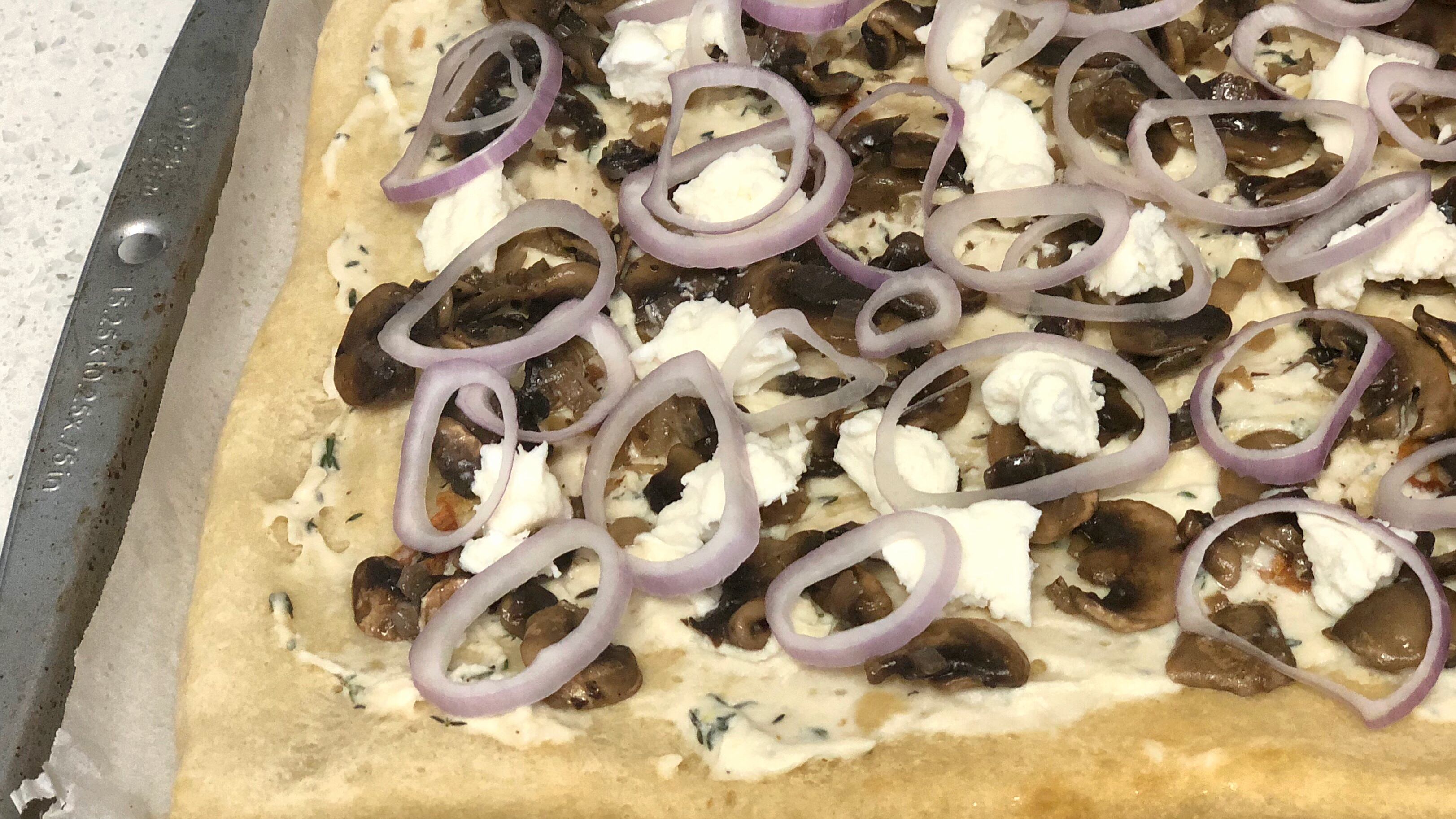 Here’s what it looks like before cooking, so you can see the spacing of the toppings.

That seems lot of steps for a pizza, huh? It’s a word-y recipe, yes, but it doesn’t take a lot of time and effort when you are actually making it. You have that 40 minute window while the garlic is roasting to cut, prep and cook the other elements, then you just set them all aside until you are ready to assemble. You could probably make the mushrooms and the ricotta mixture a day ahead of time too.

Let’s talk about cooking the mushrooms… you have to do it. The biggest mistake people make with mushroom is just throwing them on a pizza and expecting them to cook properly with the rest of the pie. That’s how you get a bland, rubbery topping. 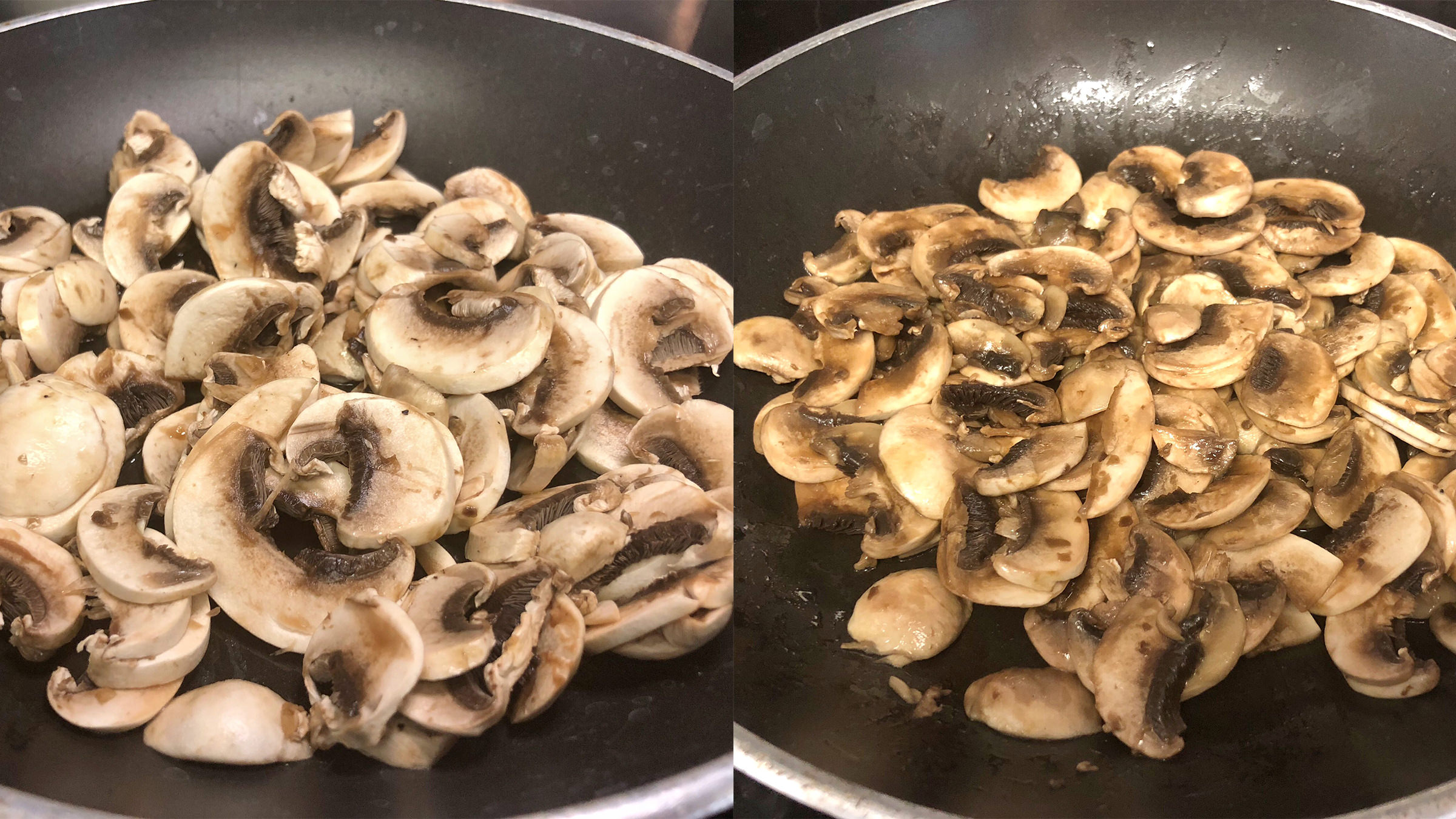 Your standard before & after

Cooking them beforehand brings out all the flavor and color you want, without any of that off-putting texture. (Which was a big turn-off for me back in the day.)

The roasted garlic/ricotta spread is my favorite part of this recipe. 1/3 of a cup might not seem like a lot, but you really don’t need to glob this all over. A nice, thin layer is all you need. That goes for regular pizza sauce too… a lot of times people go overboard with the marinara and you get a heavy, soggy pizza. 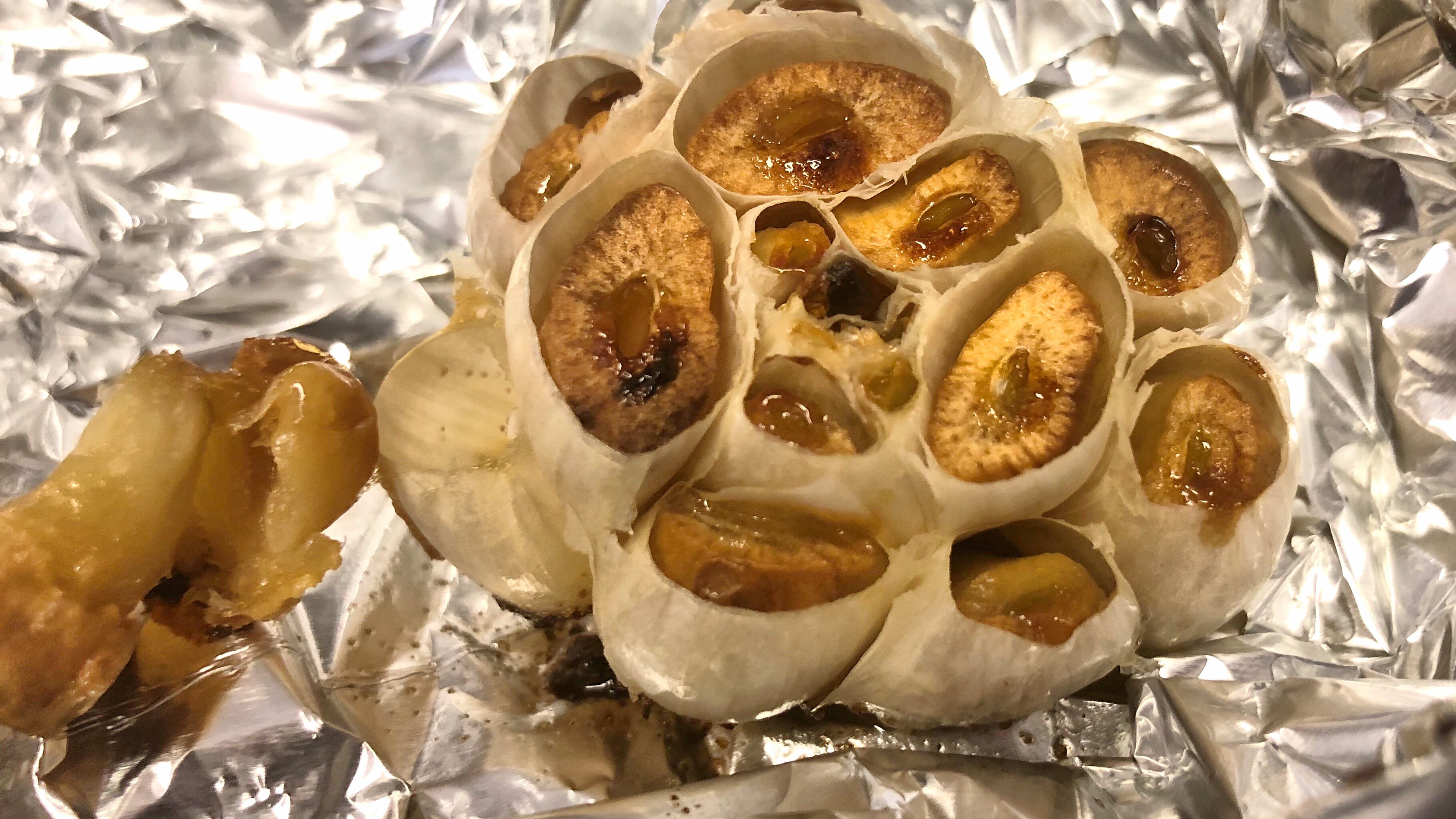 Once you smell that roasted garlic, you won’t miss the tomato sauce one bit

You could easily double the ricotta part of the recipe and make a couple different pizzas out of this at the same time. Hmm, I’m thinking sun-dried tomatoes, grilled zucchini and artichoke hearts. Or how about chicken with rosemary and capers? Some arugula tossed with lemon juice and prosciutto? The topping possibilities are endless with this base.

I also love a sheet pan for making pizza, mostly because I don’t have a pizza stone (yet). I am not good a stretching out a beautiful, symmetrical crust so I let the shape of the pan do the work. They say rustic is what you call food that isn’t pretty, but I think a rectangular pizza is quite nice. It’s also easier to cut into smaller pieces if you were serving this up at a party or as an appetizer.

Speaking of parties, I’ll be traveling over in the next couple of weeks to Chicago for a wedding, with a short visit to Seattle on the way. Hopefully I’ll have lots of fun stuff to share, maybe enough for a post! Or you can always follow my Instagram for extra photos and videos. In the meantime, go make a pizza! 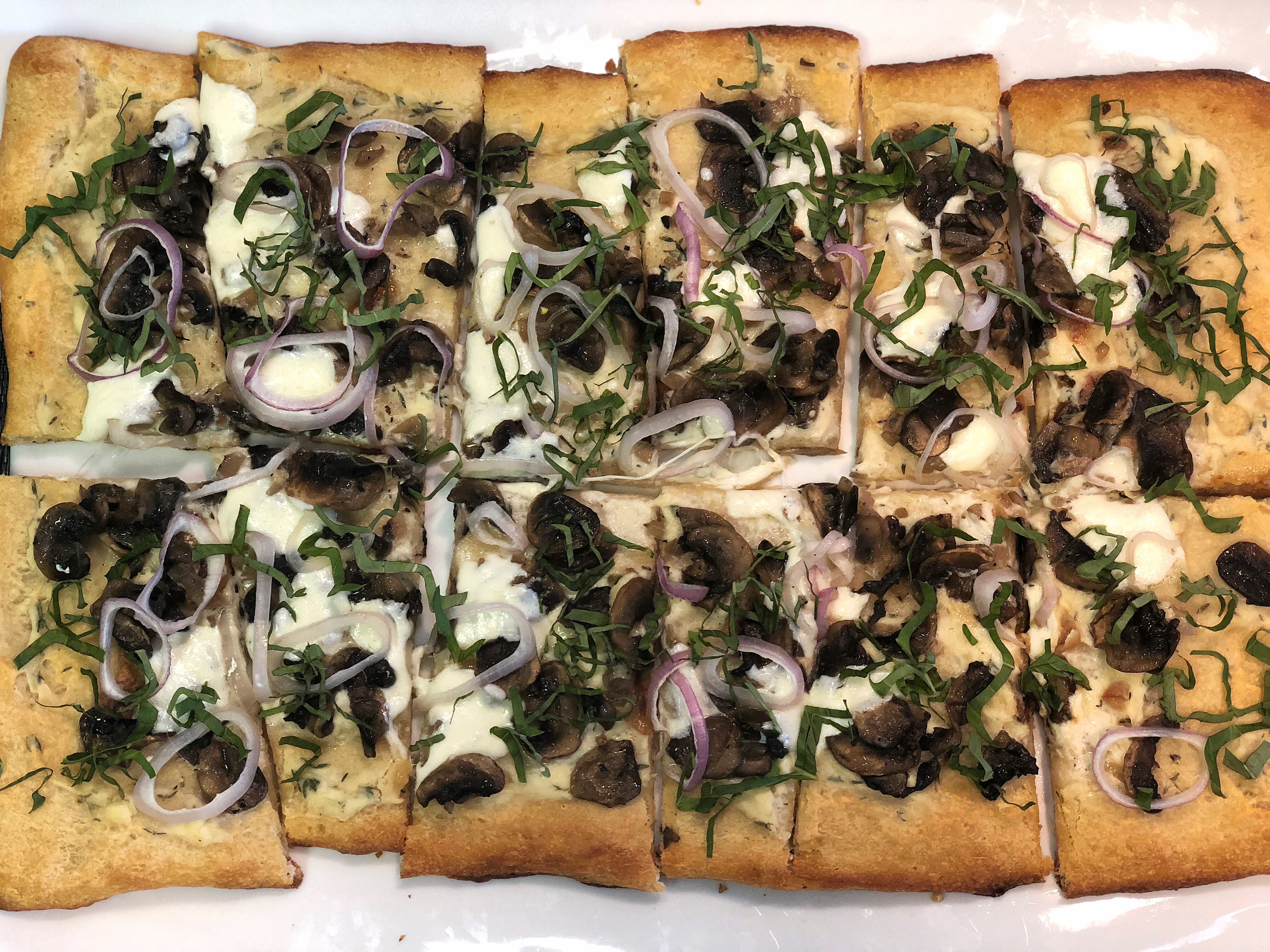